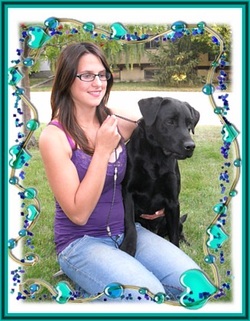 Hey everyone. My name is Courtney, I am 16 years old and am working for Shaunna Bernardin, Wags 2 Whiskers, of Calgary Alberta. I love every minute of it the bathing of dogs, grooming the dogs and best of all the dog shows!

The apprenticeship is the best part, learning how to groom dogs from
Shaunna Bernardin is like a dream come true. I love working for her, and even though it has only been 5 months, I have already learned so much!

In 2012, it is my last official year as a Junior Handler, and for that I am going to strive and do my best. Make myself grow as a handler and dog groomer. I would also love to be a consistant breeder of quality Labrador Retrievers. I love the breed, and want to improve on my breeding program in the next couple of years.

As a breeder, no reward is a small reward, I am always constantly thinking about what I can improve in my breeding program. Not only would I like to make Labradors a healthier breed, but also to have great temperments, and good quality show dogs.

I am very serious in showing, it is honestly my passion I love EVERY minute of it and can't possibly wait to make it into a profession! My most recent Labrador litter produced Peace, the craziest Labrador I have ever had in my life, Hopefully she will be my next superstar and next all around family companion.

I will be posting up-dates of goals and dreams as I continue in this journey I have such a great love for. Please come back to see where I have been and what I'm up to next on the road of life.

Past Dreams, Goals and the beginning of Courtney's Story 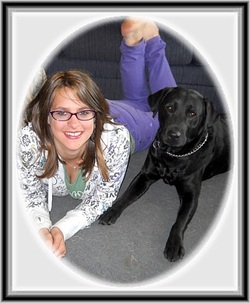 Courtney & Raven June 2008
I became interested in purebred dogs when our family added our first
English Mastiff, Lizzy to the household.
Shortly after that, we bought Fiona, our first show dog.
Watching Fiona train for competition, I realized that
showing dogs was something I was very interested in.

At six months of age, we entered Fiona in her first
dog show. I took her into the Junior Showmanship ring at that show and we got 3rd in our class!

As Fiona grew, she became too big for me to show. I then was given a black lab puppy, which we named Raven, for my very own Junior Handling dog!! Raven
obtained her Championship, handled exclusively by me, in March of 2006.

Raven and I were invited to the Provincial finals, where we took runner up
in our class. Since then, we have achieved multiple placements together.

I have also begun to show for other people. I showed a Cairn Terrier to his
Championship in just four weekends!
I am very proud of these accomplishments and plan to continue growing as a handler!
Raven and I were invited to the Provincial finals again this year 2008 which will be held on July 12, 2008 at Springbank, Alberta.

This makes it three years in a row we have made the Provincial finals. We did not make it in our group but Raven and I did Received the Teranjo Labrador Award.
This is awarded to the person that placed the "Highest" while handling a Labrador.

In Junior Handling Competition - Fiona & Raven & I all made it to the best overall competition.

But it was Fiona & I that got our first Best Overall working as a great team. 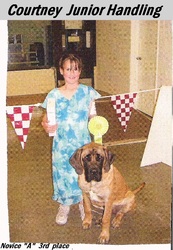 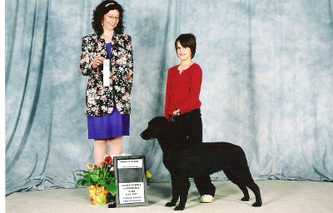 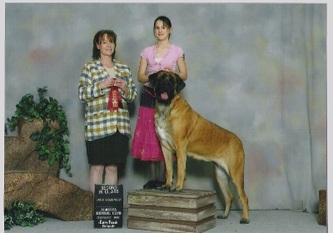 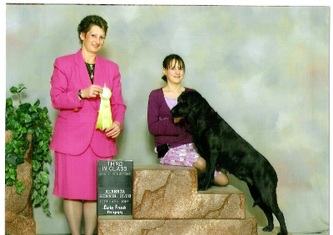 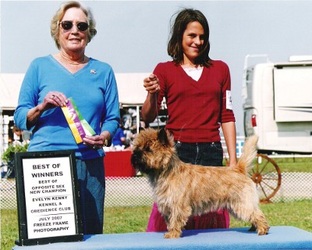 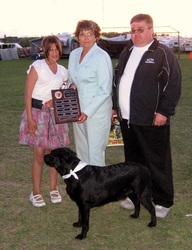 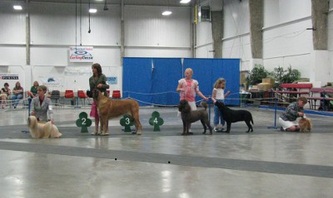 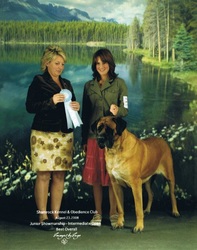